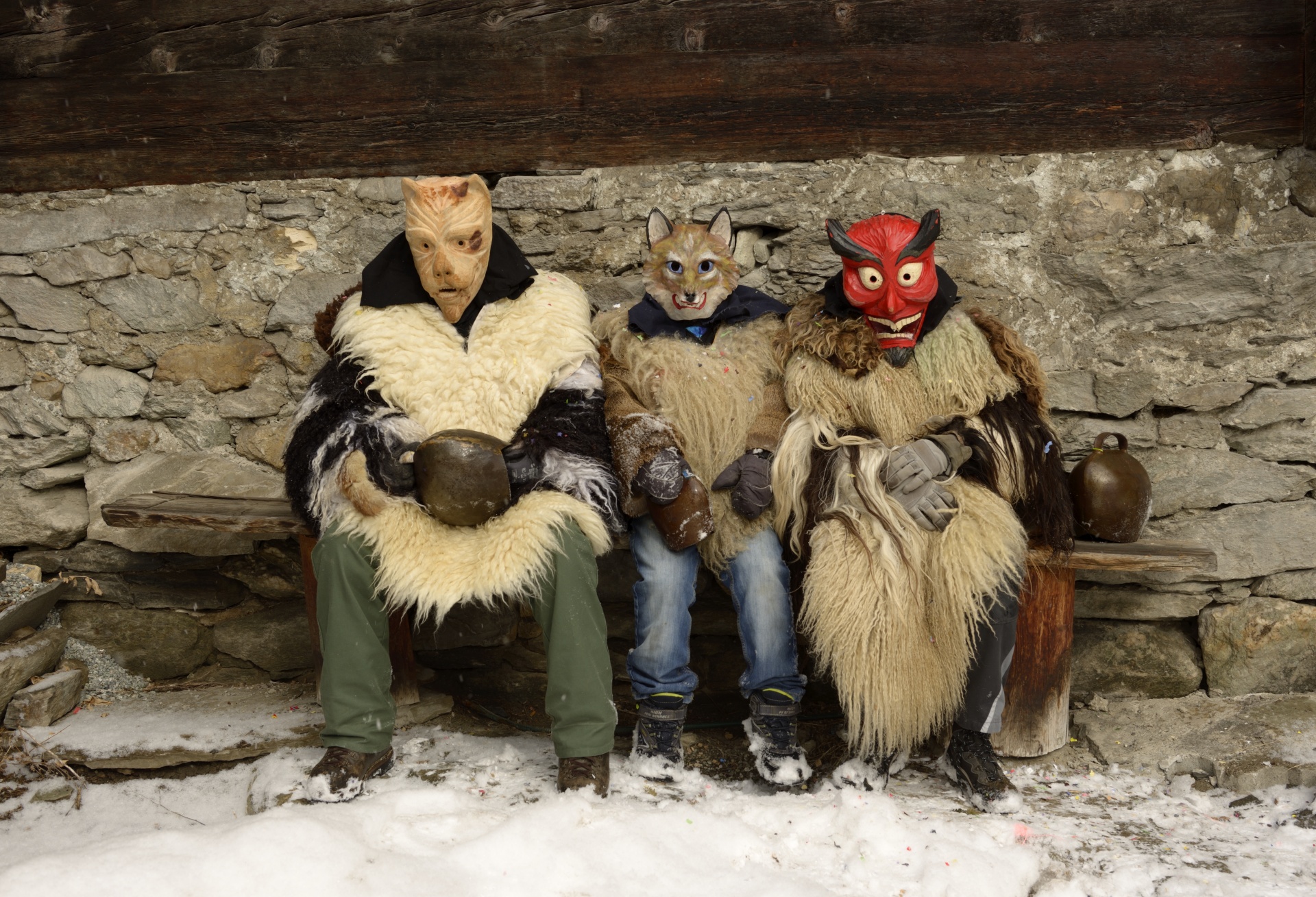 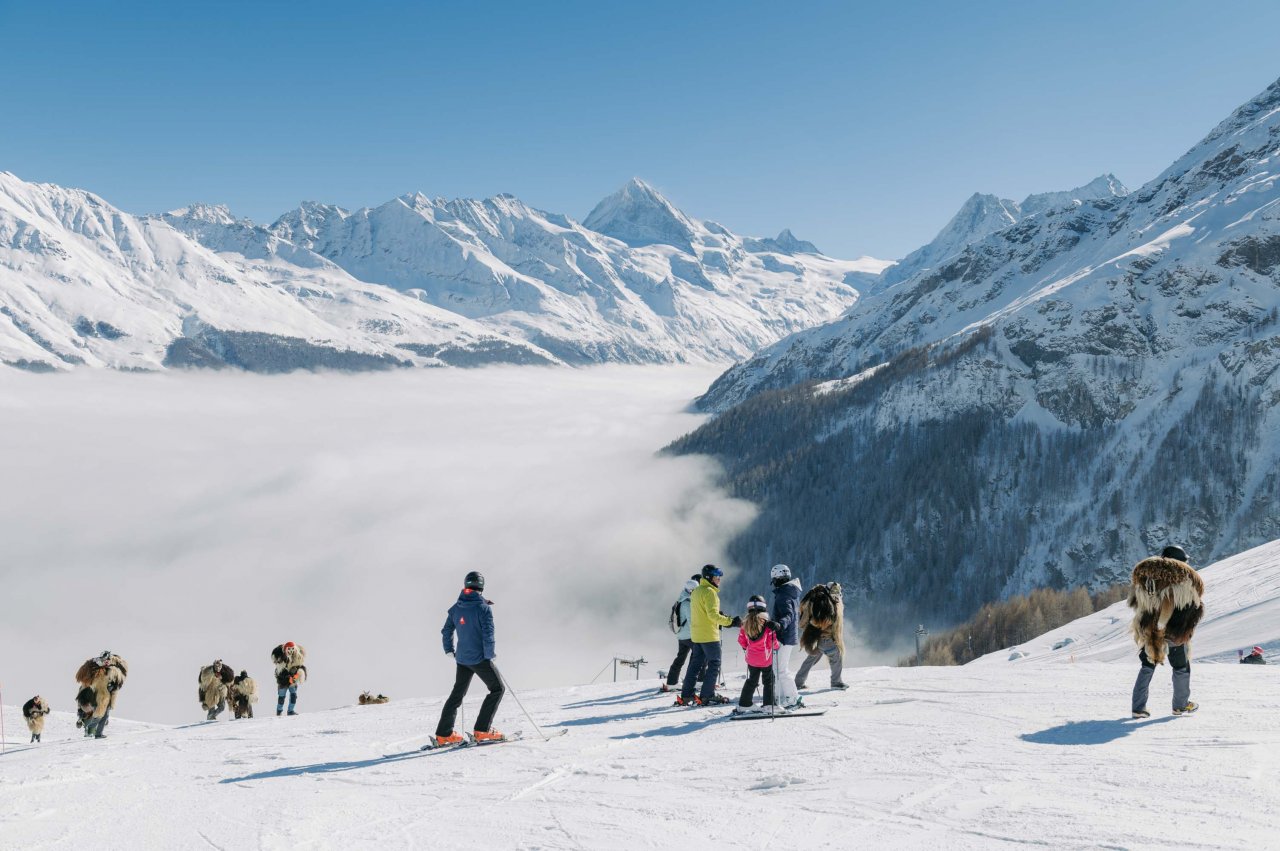 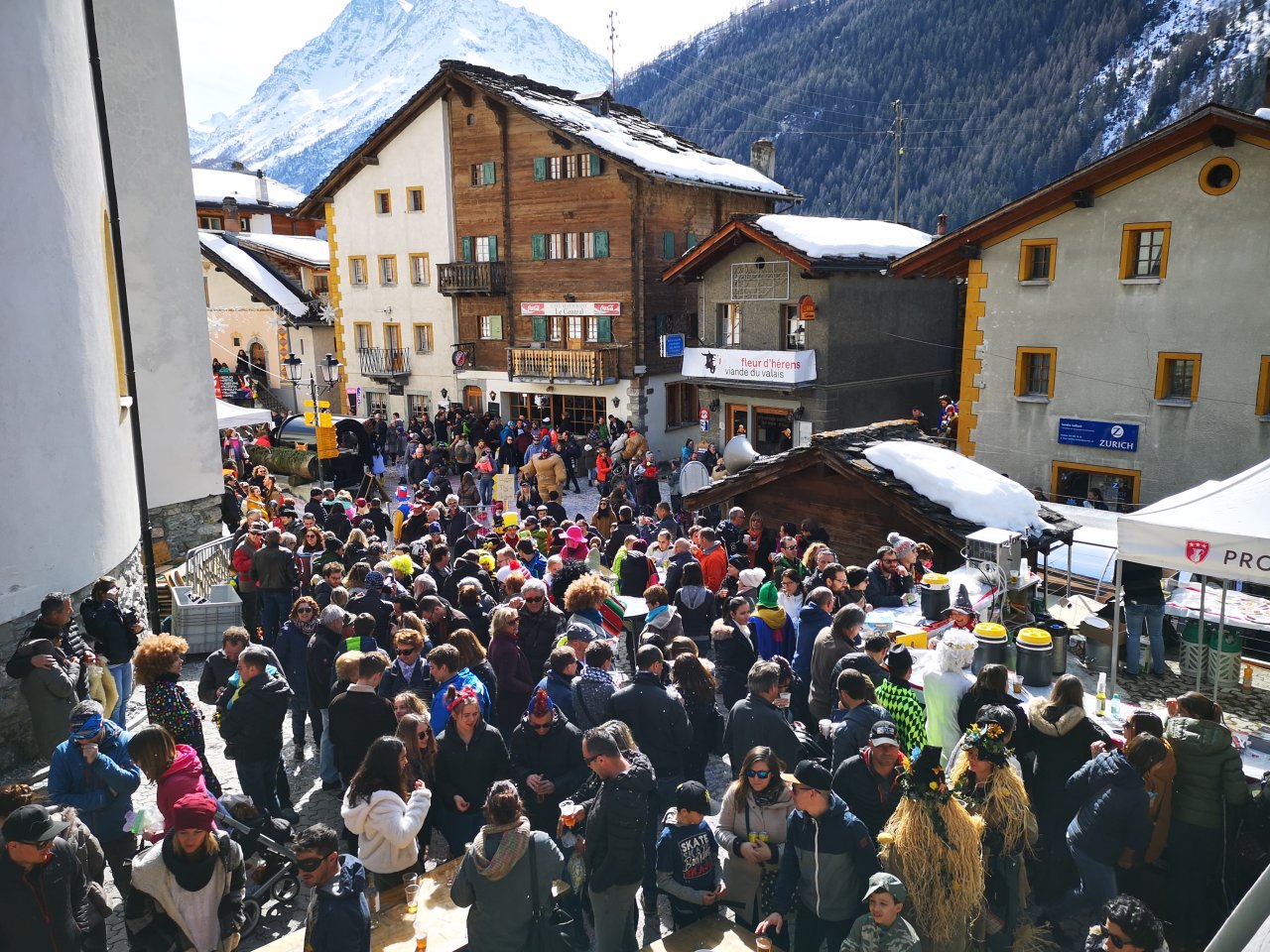 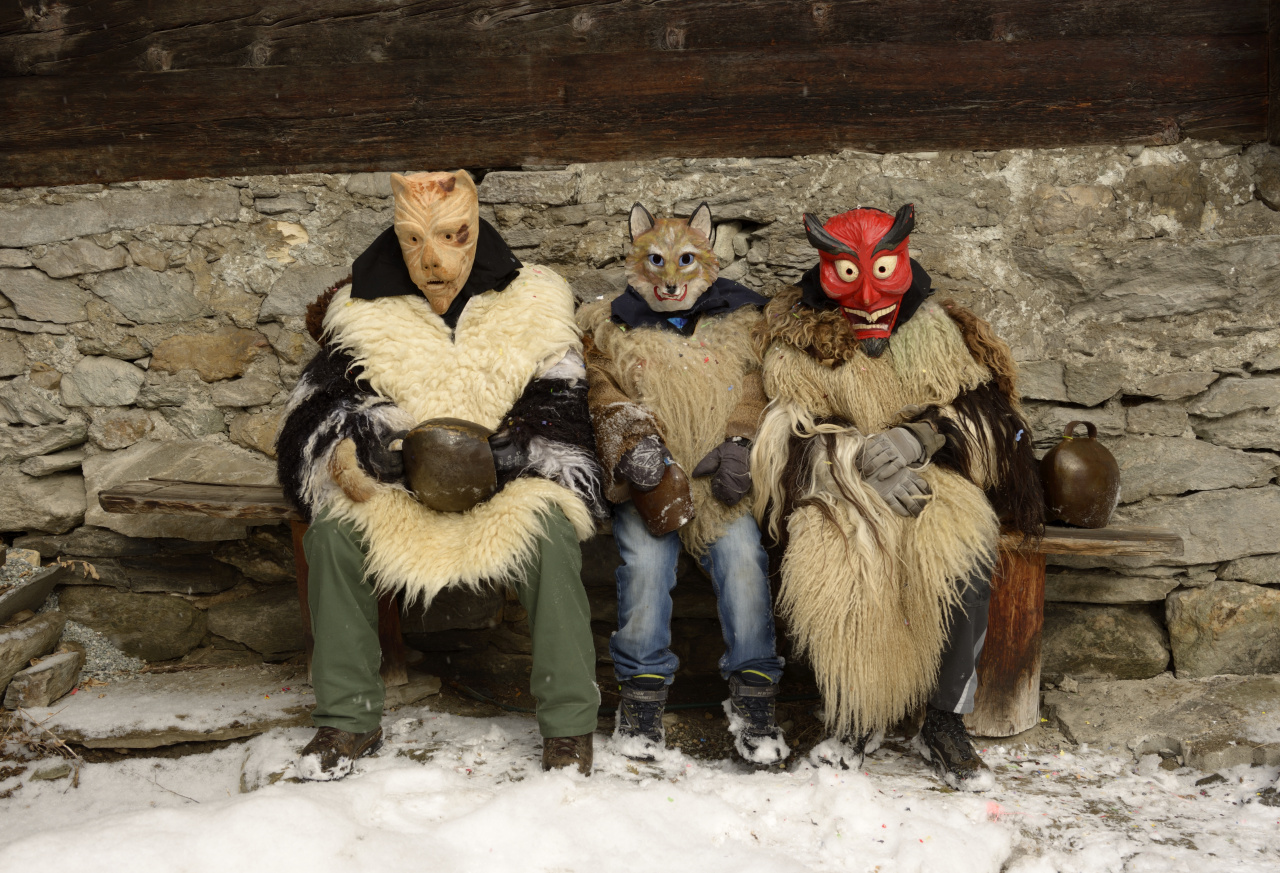 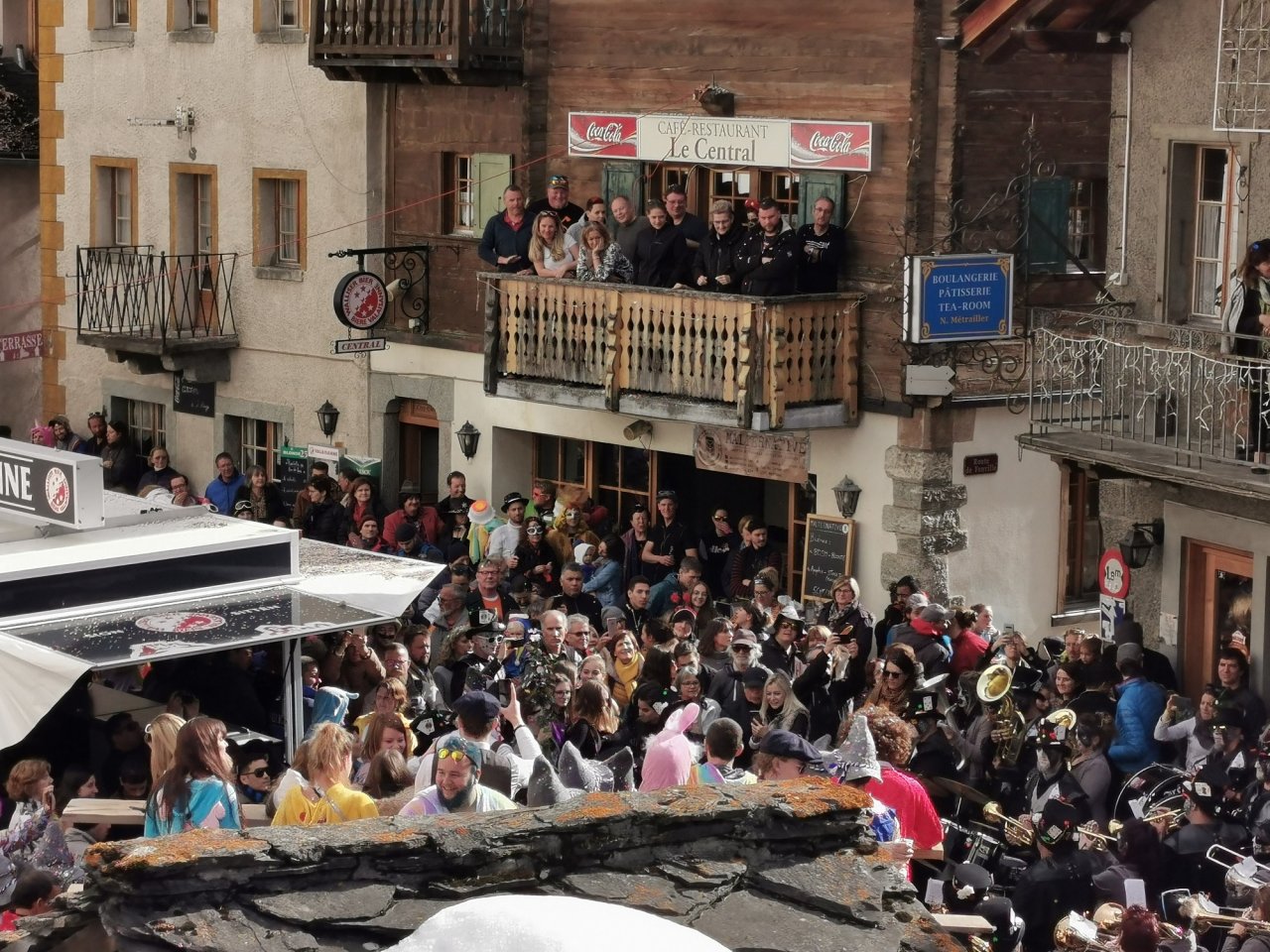 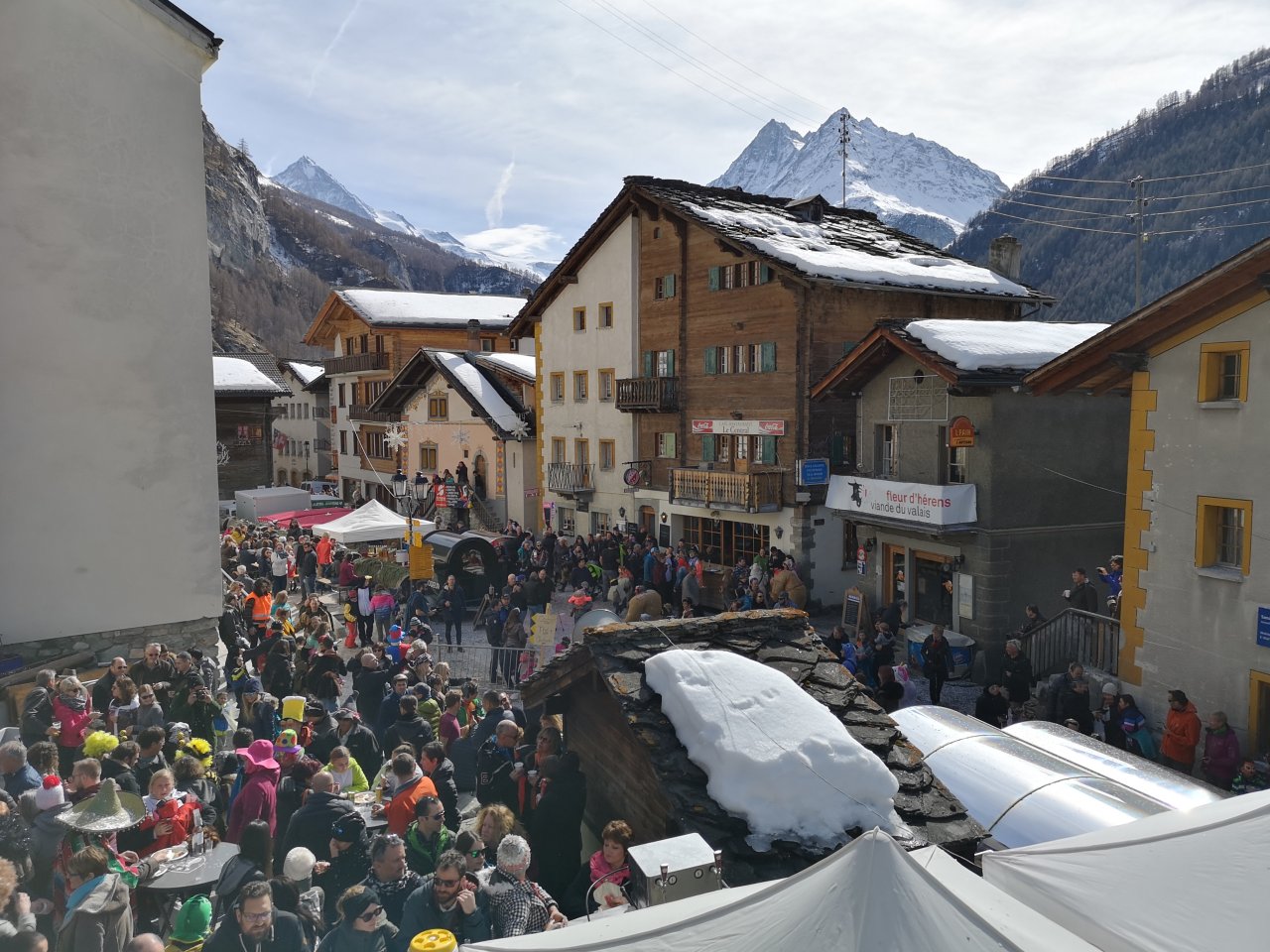 Discover the program of carnival celebration!

Traditional "Carnival wake-up call" through the commune of Evolène

From January 6th, the Peluches become the masters of the village. You can meet them at any time but most often on Fridays and Saturdays, from nightfall.
From 10:00 pm: "Unleash the cattle" evening at the Dent-Blanche.
For this opening night of the Carnival, get out your most bestial disguises to awaken the animal in you!

From 7:00 pm: "Cast your spell" evening at the Grand Hotel du Kurhaus in Arolla
Spend a magical night in the world of Hogwarts in Arolla!
Possibility to sleep on the spot for a small price

From 5pm: Official opening of the Carnival Igloo with its traditional Après-Ski
Happy hour from 5pm to 6pm.
From 10:00 pm: "Back to the Future" evening at the Pension and at the Dent-Blanche
"Marty, whatever happens, never go to 2020

From 5:00 pm: Après-ski in the Carnival Igloo. Happy Hour from 5:00 pm to 6:00 pm
From 6:00 pm: Musical tour of the group ANACH CUAN in all the bistros.
Flagship of the Swiss Celtic scene par excellence, Anach Cuan has performed more than 400 concerts in the last ten years. The eight-piece band masters the genre's canons, between powerful rhythms, folk swerves and pop melodies.
Winners of the 1st Trophée des Musiques Populaires de la RSR / TSR at the time, the Valaisans have published a live DVD and five energetic albums that have taken them to a number of prestigious venues in Switzerland, France, Italy and Poland.
From 10:00 pm: Evening " Quand je serai grand, je voudrais être " at the Mazot and the Central.
You will notice the subtle play on words in the title. Indeed, the next generation will not be able to know the mythical " Le Central, chez Eddy et Karine " who are passing on the hand after this Carnival.
It's up to you to honor this establishment that serves as "Peuy" for a good part of the locals.

From 5:00 pm: Après-ski in the Carnival Igloo. Happy hour from 5:00 pm to 6:00 pm.
From 10:00 pm: "Cartel de Fonville (drug dealers)" evening at the Mazot.
Inspired by the famous smugglers hidden downstairs at "Chez Raymonde", this evening will allow you to make a good deal on raclette cheese from Les Haudères, elected best raclette cheese AOP in Valais in 2022.

From 5:00 pm: Après-ski in the Carnival Igloo. Happy hour from 5pm to 6pm.
Craft beer tasting tour in the partner establishments and the Igloo. In each organized stage, possibility to buy a general map of the route (with a box per stage). This allows you to taste in a playful way each tasting assortment proposed. A completed card = souvenir gifts to be collected at the end of the tour at the Igloo. There is no time limit or order of the stages.
The breweries are of course open to everyone, even without a map or a route.
With the participation of the following Valaisan craft breweries: Malternative, Mont-Noble, Bartis, Old Tribe Pico, Lynx Movement, Traquenard, ...
Infos here
From 22h00 : Evening " Up to Valhalla (Viking) " at the Pension and at the Dent-Blanche.
Take your best horns and come to make them resound in all Midgard!

From 5:00 pm: Après-ski in the Carnival Igloo. Happy hour from 5pm to 6pm.
From 10:00 pm: Evening " C'est toi mon BEAUF Valais " at the Central.
We thought an explanation was not necessary here ^^

From 4:30 pm : Sporting and recreational race by roped team through the streets and bistros of Evolène.
With souvenirs for the participants and prizes for the best ropes.
Info and registration here
With the participation of the Guggen Pampanas of Cudrefin
From 22:00 : Evening " The Olympics " in all the establishments of the village.
In the absence of real Olympic Games in Sion in 2026, come and shake in the village of Chantal Bournissen (Source: Wikipedia).
00h45: Lunabus in direction of Les Haudères, Les Rocs, Saint-Martin and in direction of Euseigne, Hérémence, Vex and Sion.

Carnival in Les Haudères
Traditional atmosphere in the restaurants of Les Haudères.
From 10:00 pm: "Butchery at Léo's" evening at the café-restaurants of Dents de Veisivis and Petit Café.
In honor of our new young butcher from Les Haudères, LÉO, get out your best disguises related to this culinary art!
Ball at Veisivis with Jean-Paul and Jean-Paul

From 5:00 pm: Après-ski in the Carnival Igloo. Happy hour from 5:00 pm to 6:00 pm.
From 10:00 pm: "Cuir Cuir Cuir Moustache" evening at the Mazot and the Central.
Grow a moustache and play the role of legends such as Freddy Mercury, Charlie Chaplin, Rob Halford or the most charismatic moustachioed people of the region: the archpriest or even Jean-Yves Rumpf of Télé-Evolène!

Awakening of the Spirits of the Mountain.
After-ski at the Kurhaus bar and arrival of the Peluches at nightfall.
Around 6:00 pm: In Arolla, torchlight descent of the Peluches to the village.

5:30 pm: Evening of tales and legends of Carnival at the Maison du Carnaval (Museum of Evolène).
Also possible on the following dates : Thursday February 9th and Monday February 20th
=> More info here
From 10:00 pm : " On the way home from work " evening at Le Mazot
"The house is close, but the road is icy. The bar is even closer, I'll walk with haste "

From 5:00 pm: Après-ski in the Carnival Igloo. Happy hour from 5pm to 6pm.
From 10:00 pm: "Tricolor" evening (red = in couple, yellow = it's complicated, green = single) in all establishments
Because under a mask it's always complicated to know who you're dealing with, we propose to make the outcome of the evening easier!

From 11:00 am: The Peluches climb on the slopes of Télé-Evolène in Chemeuille. Animations at the restaurant " La Remointze ".
The Maries go for a walk in the different villages of the commune.
From 5:00 pm: Après-ski in the Carnival Igloo. Happy hour from 5:00 pm to 6:00 pm.
Animation of the village with music by the Guggen Loitschou's Band from Montfaucon
From 10:00 pm: Evening "The cluster of August 15, 2021" in all establishments of the village
Get out your best FFP2 masks and Hydro-Alcoholic gel instead of leaving them lying around in your cupboards

At daybreak : Stuffing at Clos-Lombard
10:30 am: Mass at the Church of Evolène and blessing on the square of the church.

Around 11:00 am : At the end of the mass, a wave of stuffed animals and stuffed animals.
Parade through the village with musical groups and confetti cannon.

From 12:00 pm : Traditional boar on the spit and other grilled meat.
Meal of the masks on the place of the Furnace and the place of the church.
All day long on the theme: "Evolène, village of die-hards".
The village of Evolène is transformed into a village of irreducible Gauls.
Musical entertainment in the streets, village atmosphere until the evening
Animation by the Jura Guggen Loitschou's Band

From 5:00 pm: Après-ski in the Carnival Igloo. Happy hour from 5pm to 6pm.
5:30 pm: Evening of tales and legends of Carnival at the House of Carnival (Museum of Evolène).
Also possible on the following dates: Thursday February 9th and Thursday February 16th
=> More info here : https://carnaval-evolene.ch/decouvrir-la-tradition/
From 8:00 pm to 10:00 pm: Search and arrest of the Poutratze by the elite carnival troop and with the participation of the public.
From 10:00 pm: "Famous look-alikes" evening at the Tavern
Because all the famous people are not evolénards !

From 5:00 pm: Après-ski in the Carnival Igloo. Happy hour from 5pm to 6pm.
With the participation of the Guggen " Les Chenegaudes " from Saint-Martin.
21h00 : Procession of the judgment of La Poutratze in direction of the pyre. Reading of the verdict and the Testament of Gustave Chevignoule. Putting to death of La Poutratze.
10:00 pm: Closing party "Masked from head to toe" in all the establishments of the village
The goal -> to remain anonymous until midnight like the Peluches
00h00 : Gathering in front of the church, lifting of the masks and closing of the Carnival 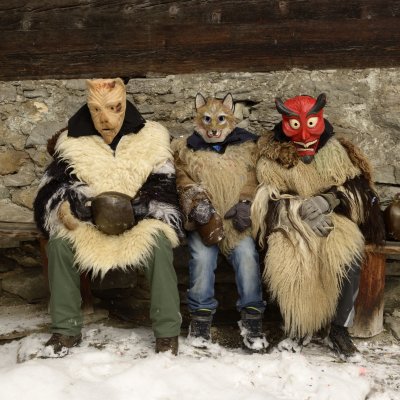